skip to main | skip to sidebar

Ekballo is no more

Find us on facebook for updates on life.
Chris and Gail

Craigslist, you never let me down. 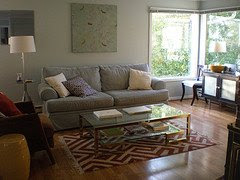 I've been in love with CL for about 8 years now. Each time we've moved in the last 6 years, we've sold most of our furniture on Craigslist and redecorated upon moving. Thank you Craigslist. You've also supplied us everything from apartments to office space to our amazing dog.
Most recently, I found this incredible coffee table. For $25 I should add. Manufactured by Scan Design, this table is sturdy but light. It is the perfect piece for the new "adult" living room I was craving, yet crayons wipe up easily after a creative moment involving 19-month-olds.

It's realtor; not realator. Get rid of the extra syllable!
It's voila (pronounced vwa-la); not walla. Get that V in there!
It's sherbet; not sherbert. Get rid of the extra R!
It's more THAN or rather THAN or better THAN, etc.; not THEN. If you use an A rather than an E, then you will be speaking correctly.

After
Video - we are right in front of the camera about 2 minutes in.
Results - Gail is 1567; Chris is 1569; both finished in 1:02:00
The boys did fine, though Oliver screamed off and on for the whole hour. He was much happier when he was able to get out of the stroller. Alexander eventually fell asleep.

Filed in: butte to butte, running

I suppose we'll keep the blog to pop things online every now and then, but I think Ekballo may be in its twilight days.

to get this song out of your head.

Posted by Chris Spinks at 8:45 AM 0 comments

In March I changed my eMusic subscription to one that renews every 3 months instead of every month. Here's what I've acquired since then (some non-eMusic albums mixed in). Listen here.

The beautiful woman I'm with in this picture gave birth to the two most beautiful boys in the world.

The beautiful lady in this picture gave birth to two boys as well (not the ones in the picture with her). I am fortunate to have been one of those boys.

I love both of these women very much and I am thankful everyday that they are great mothers. Today is the day I should especially call attention to my gratitude and love for them both.


In short: the state of Texas would rapidly become direly impoverished, would need to be heavily armed, and would be wracked with existential domestic and foreign policy threats. It would probably make our failed states list in short order. Probably better to pay the damn taxes.

(NOTE: For those of you inclined to respond simply by reading the excerpt from the article above, please resist temptation. First go read the full article, then come back and make a response if you feel the need.)

The whole idea of secession is stupid. Perry ought to lose the re-election simply for entertaining such a dumb thing. But, still, being from Texas and still having family there, I would hate to be unable to visit. So I am praying that such an asinine idea never gets off the ground. It appears to be illegal anyway.

We don't claim to have green thumbs, but we are kind of proud of the work we've done on our front flower bed.

Now, if the sun will just come back and give these plants some light and some life.

Posted by Chris Spinks at 9:57 AM 0 comments

These guys are right. This was one of the most boring NCAA tournaments in recent memory.

We are getting fleeting splashes of sun breaking through the gray that hangs over Eugene for half the year. This morning the sun shone bright onto the table where we were feeding the boys. It cast a nice shadow of Alexander on the opposite wall. Even the boy's shadow is freaking cute!

The good and the bad

Last night was good and bad. Good, because both Baylor teams won close games. And bad, because little Oliver slipped in the bathtub and hit his eye. I'm sure this will not be his last shiner, but it was sad nonetheless.

Posted by Chris Spinks at 8:11 AM 1 comments

I don't consider myself a prude, especially when it comes to broadcast television. My favorite shows are some of the most graphic (see for example The Wire). But I'm beginning to develop a sensitivity to the things my boys might be exposed to. We do not intend to let them watch that much TV. Their screen time is and will be pretty limited. But every year about this time you can be sure that our TV will be on more than at any other time of the year. I come down with a case of March Madness every year, and I don't see a cure in the foreseeable future. The boys, of course, quickly turn their eyes to the TV anytime its on. Surprisingly they seem to like the basketball action. Alexander the Talker goes on at least a five-minute string of "Ball, Ball, Ball..." Oliver the Walker toddles right up to the TV, which is on a table higher than he can reach, and looks up at it mesmerized for 30 seconds or so. Eventually they go back to their own devices, but I'm kind of happy to see them show some interest. I imagine the three of us all with a case of March Madness in a few years. I'm excited to think that we can watch some games together.

But, what am I going to do about the commercials and promos? On the first day of the tournament this year I must have seen the ad for Resident Evil 5 at least a half dozen times. Even with the sound muted the screen was filled with guns, fire, monsters, axes, chainsaws, and other murderous things. I DO NOT WANT MY BOYS SEEING THIS CRAP!!! And I do not think it is necessary for me to have to turn away during commercial breaks and then try to guess when the commercials are over to make it back to the game in time. On one level I think video games like this are just plain stupid. I realize, however, that I will not be able to eradicate the world of Resident Evil 5, though given enough guns and chainsaws the game leads me to believe that I can eradicate the world of biohazardous creatures. I simply want to keep these images from the eyes of young boys, who I hope will develop a love for basketball like their papa. CBS is much to blame. They are sure to know that dads (and moms) and their sons (and daughters) stay up to watch their favorite teams. They are sure to know that Resident Evil is rated for mature audiences. They are sure to know that young boys and girls watching the game will be affected by the images in the advertisement. But, I am sure to know that they are getting a pretty penny for the air time. What is maybe even more disturbing is the promo for one of CBS's own shows. I saw the promo for CSI:NY about as much as the Resident Evil ad. The promo is filled with images of messages cut into human parts. Again, muting does nothing. These grotesque images are there, sound or not.

It's enough that we will have to combat the constant message of consumerism. I'd like to not have to guard against gratuitous violence as well.

Maybe I am a prude.

This is a Flickr badge showing public photos from dcspinks tagged with twins. Make your own badge here.